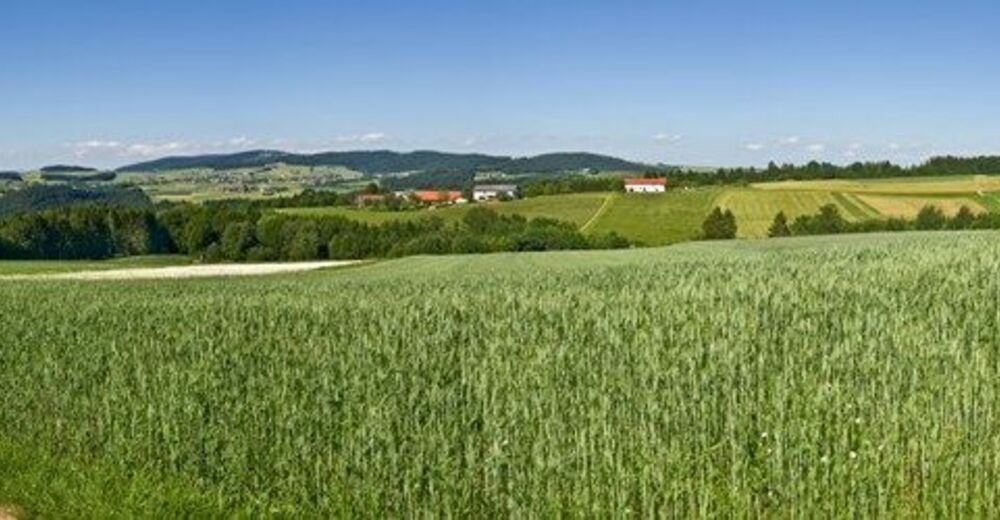 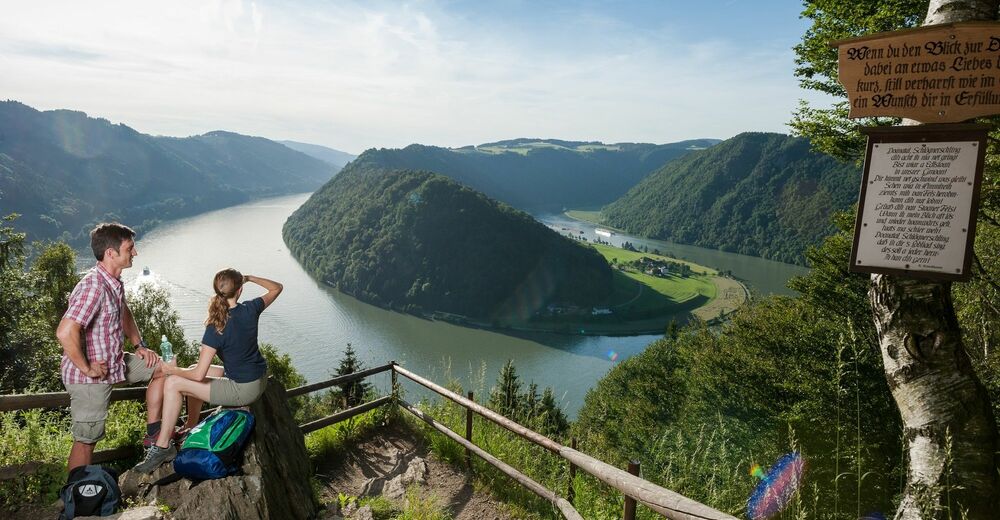 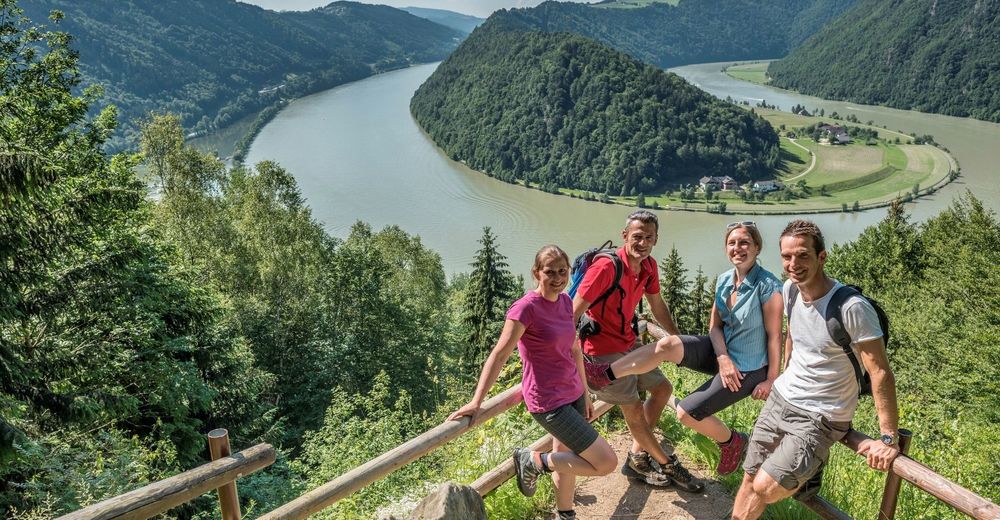 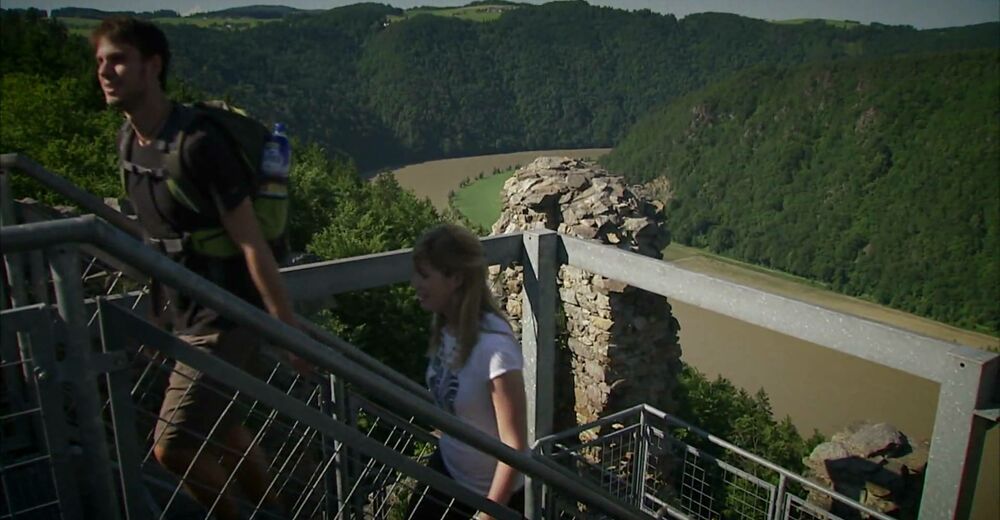 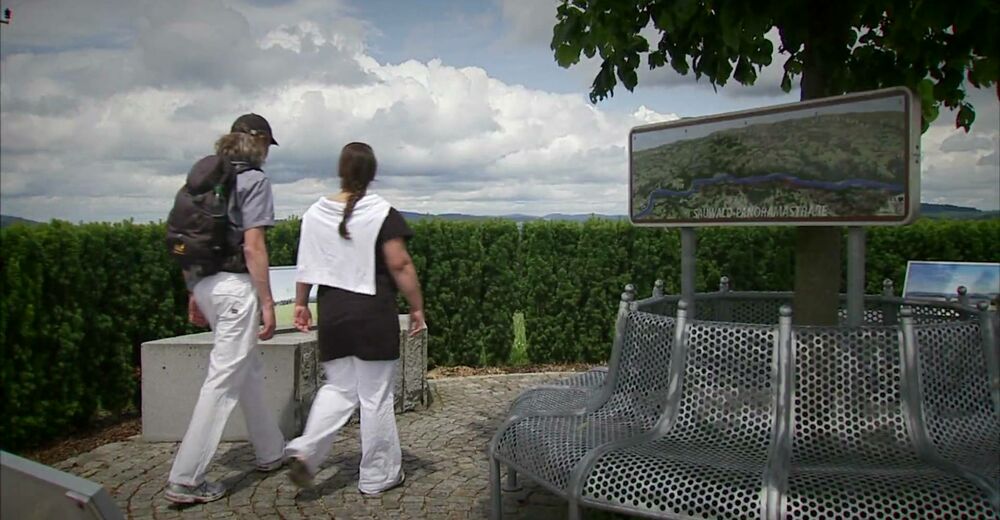 The Donausteig-simply fabulous! This stage leads us from Engelhartszell first through the forest rich Durchbruchstal (valley) of the upper Danube, then across the rural Sauwald plateau to the deeply buried Schlögener loop. We discover the historical Engelhartszell, the only Trappist monastery in Austria, the hidden nature jewel of the small Kösslbachtals (valley), the four quarters of Upper Austria, the magnificent natural wonders of the Schlögener loop...

Engelhartszell - The Donausteig-starting point "engelhartszell' is located to the right of the Engelhartszeller Danube world's exhibition building "Donaugeschichten“ by the playground (on the Sauwaldstraße (street) prox. 30 m southeast of the municipal office of Engelhartszell).

Best season
Jan
Feb
Mar
Apr
May
Jun
Jul
Aug
Sep
Oct
Nov
Dec
Description
This Donausteig-stage starts in Engelhartszell. The historic Danube market is hidden in forest rich Durchbruchstal (valley) of the upper Danube near the Bavarian border. The beautiful town tells of its significant history as an imperial toll station and merges with the many locations of the Engelhartszeller Danube world to become the adventure world "Danube" - simply fabulous! From the heart of the village we follow the mighty Danube River on the Treppelweg, 4 kms downstream. A short detour to the Trappistenstift Engelszell (abbey) with its wonderful rococo church is  recommended - a true gem! Later, the long Danube offers plenty of time to ponder. Suddenly, it becomes new meaning and quality becomes clear to the deliberate silence of the Trappist monks which sharpens also our sense of what is special around this magical place. In Oberranna, we make a short arc up into the forests. The beautiful view back into the Danube valley reward our efforts to reach this point. At the mouth of the small Kösslbachs (stream) into the Danube, we reach the great river again. Now one of the top 10 natural highlights of the Donausteig begins; the climb through the secluded little Kösslbachtal (valley)! After a small stretch of forest road, a beautiful uphill hiking trail through jungle-like ravine forests begins. Mossy stone runs and mystic rock towers inspire our imagination here. Highlight of this natural jewel is the rock pulpit "Felsen-Blick" high above the Valley - a secluded place! Shortly thereafter, the rural ­plateau of the Sauwald (forest) begins. A mosaic of extended forests, flowering meadows, fertile fields and traditional farms characterize the surroundings. On small farm road uphill, we reach the Donausteig-resting point "4/4 Blick". Congratulations – here we are at the first summit of this stage! The unique 360 °-panorama view allows almost limitless sites into all four quarters of Upper Austria. The walk continues on farm roads over gentle ups and downs through the wonderful cultivated landscape. In Aichberg, the Donausteig leads down into dense forests and follows the mighty river there high above the Danube its mighty current. One becomes aware of the diversity of forests here in the upper Danube valley. In Waldkirchen, we return to the high plateau. Here a short detour to the picturesque Parish Church of the village is recommended. Here, the Donausteig makes a deep loop into the forest where beautiful views of the neighbouring Danube castles open up to us. Once again arrived at the plateau, we enjoy the spacious sites and hike over rural roads to the Paschinger Hill with its Donausteig-resting point. Congratulations – here we are at the second summit of this stage! The magnificent view in three directions allow us to see an incredible 20 towers. From here, the descent begins. Small farm roads bring us to Straß, where we descend on field and forest roads through the steep forests into the Valley to the magnificent natural wonders of the Schlögener loop . The Donausteig - an unforgettable experience!

Discover the following features with the Donausteig-diary

-Blacksmith-shoes for the ship horses

-Balance-life with the water level

-Granite is not always granite

Wegbeschreibung
From the Donausteig-starting point "Engelhartszell" we go along the Sauwaldstrasse (street) to the Danube and turn right and follow the path along the embankment downstream. After the ship supervision office, turn right (via the underpass) and take a detour to the monastery of Engelszell. The Donausteig runs however straight ahead and rises to the Nibelungenstrasse (street). The route the follows the danube for about 4 km: first along the Treppelwegs, later in Saag over a narrow hiking path and finally on a roadway. At the Donausteig-resting point "Donaublick Rannariedl", the trail leaves the Danube and leads out to the Nibelungenstrasse (street). There, continue left till in Oberranna where a roadway branches off to the right to the chapel "Magna mater Austriae". On this, continue uphill through the forest. Pass the clearing with two houses and descend after a small rise back down to the Nibelungenstrasse (street). On this, we cross the bridge of the small Kösslbachs (stream) and turn right. Now, a forest road leads moderately rising into the secluded and heavily forested small Kösslbachtals. After the bend a climb branches off to the right and leads partly very steeply through the most traditional alpine part of the valley up to the pulpit of the "Felsen-Blicks" high above the valley. A little later, we stand on the edge of the gorge at the Donausteig-resting point "Felsen-Blick". Now begins the undulating landscape of the Sauwald plateau. In an s-curve (Do not try to shortcut!) the trail goes across the meadow to the farm from which we slightly each further uphill a T junction on an asphalt road. The road to the left brings us straight to the Donausteig-resting point "4/4-Blick". This road then continues on to Atzersdorf (village). Here we turn left at the Inn Sigl and arrive at the next T-junction keeping to the right into Aichberg (village). The Donausteig turn at the fire station first to the left and after 100 m right again (at the former Castle tavern). A dirt road then feeds into an s-curve to reach the edge of the forest. After a short descent we walk leisurely on forest roads to Waldkirchen am Wesen. Near the parish church an asphalt road starts, on which the Donausteig continues to the left downhill to the main road Wesenufer-Neukirchen. Cross the main road and then immediately turn left. A paved trade route leads us through the forests down to a secluded farm in a forest clearing (Vornwald). Hereafter, forest roads in wide bends take us back uphill onto the high plateau of the Sauwald. Arrived at the asphalt road (fire station), we reach on this keeping to the left the Donausteig-resting point "Paschinger Hill". The road continues forwards up to Straß. Here, the Danube trail branches off left. On a dirt road, it enters a left curve leading to the edge of the forest. Then the forest trail in several sharp bends down to the clearing of Mitterberg. There on the tarmac road keep left and continue downhill. At the farm keeping left we hike through the last stretch of the forest and finally reach the Nibelungenstrasse (street) in Schlögen. Turn right, and then a small road leads left directly to the Donausteig-starting point "Schlögen"in front of the Hotel Donauschlinge.

To facilitate the orientation, the Donausteig was provided with its own orientation system - you will find the description  here  .

The Danube market Engelhartszell is a small wonder - take time to see some of the attractions!

The starting point of this stage is on Sauwaldstrasse (street) prox. 30 m southeast of the municipal office of Engelhartszell  (Navigation: A‑4090 Engelhartszell, Gemeindeamt/Marktplatz 61).

Public transportation
Engelhartszell can be reached via bus. A transfer back from Schlögen is possible as well. Information on bus timetables online at http://www.ooevv.at  .
Parking

Directly infront of the Donausteig-starting point there are numerous parking possibilities on Sauwaldstrasse (street). Further praking possibilities can be found on Stiftstrasse (access road to the Stift Engelszell; prox. 10 walking minutes away). Take care for possible short parking areas.

Donausteig Stage 1_S03 Engelhartszell - Schlögen: „Over the 4/4-view to the Schlögener Loop“ 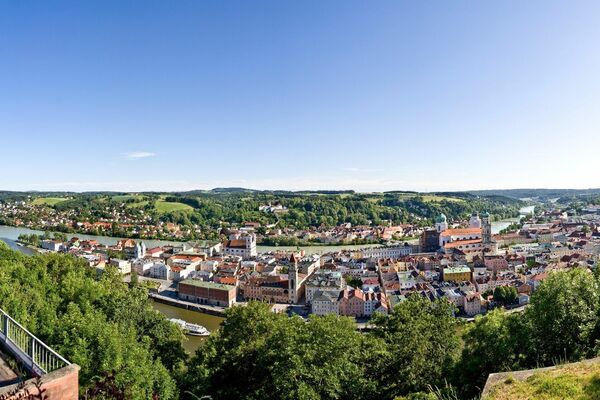 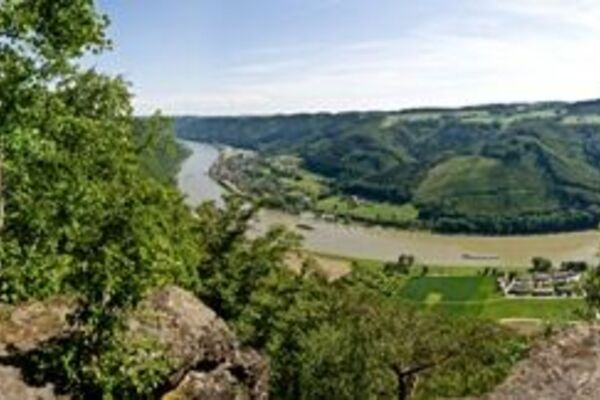 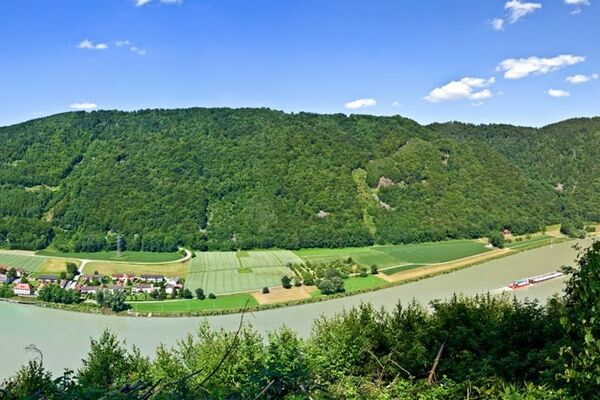