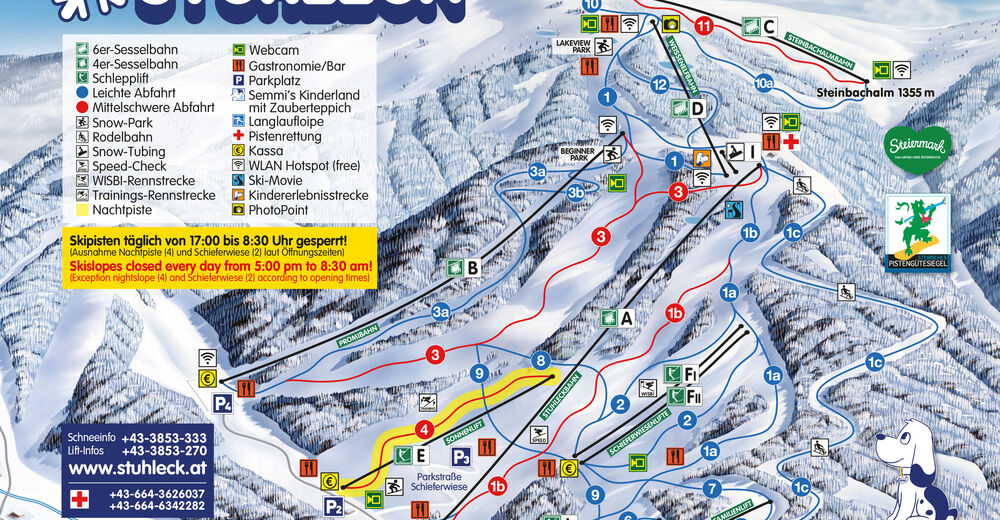 At 1,783 m, the Stuhleck near Spital on the Semmering is the highest mountain on the eastern edge of the Alps situated in Styria and the largest ski area in eastern Austria. In 1891, the Stuhleck became the first peak to be conquered on skis. This pioneering act marks out the Semmering region as one of Austria’s top winter sporting areas, and ensures its continued reputation as the “cradle of winter sports” to this day.

The Spital resort at Semmering-Stuhleck is a true paradise for all ski and snow fans. Skiers are chauffered in the connected comfort of the 4- and 6-seater chairlifts, many of which have protective covers, up the mountain, to enjoy the 24 km of downhill runs where snow is guaranteed, because all the slopes on the Stuhleck are equipped with state of the art snow machines.

For those with sufficient energy, the day’s skiing continues into the late evening on the floodlit slopes by the Sonnenlift.
Après-ski programmes in one of the town’s ski huts or bars round off the night’s entertainment.

The new Blue-Tomato Snow Park awaits you in the next season:

Under the direction of Park Manager Rob Mathera and his crew a daily perfectly shaped Park full of Rails, Boxes, Jibs, Wood Obstacles and Kickers awaits you.

The resort also offers alternative winter fun in the form of the snow tubing run, which is particularly popular with the kids. There’s even a 5 km long natural toboggan run from the Stuhleck cable car’s top station to the middle station - perfect for families!